On September 25, 2017, CPH Skopje reported a measles epidemic in the territory of the municipality of Gazi Baba-Kvantaska deponija.

Regarding the place of residence, 10 (52,6%) people from the diseased live in Madzari- Kvantaska deponija, and one person in the village of Kondovo, Suto Orizari, Cair, Butel and Kisela Voda and one of the deceased children is a foreign citizen – he lives in Lipjan, Kosovo.

Two people have a place of residence in Prilep, ie Struga, but temporarily stay and work in Skopje.

Regarding the vaccine status, 73.7% of the total number of infected persons (n ​​= 19), ie 14, are aged up to 29 years and are not vaccinated with MRI vaccine. Only two of them were not subject to vaccination while others missed the regular vaccination. Four people were vaccinated (with one dose of MRI) during the vaccine dump conducted on September 23, 2017 in the Kvantashka Deponija, while the  incubation. From the 5 sick people belonging to the age group over 30 years, 4 people have been vaccinated with one dose, and one person has been vaccinated with 2 doses. Of these, 4 people are health workers or work in health institutions and have had contact with patients with measles.

Of the total number of registered cases (n = 19), 18 were laboratory confirmed, and one is a clinical and epidemiologically related case.

All laboratory confirmed cases have been confirmed in the Laboratory for Virology and Molecular Diagnostics of the Institute of Public Health – a reference laboratory for measles and rubella, according to the recommendations of the WHO and 1 case at  the Clinic for Infectious Diseases and Febrile Conditions in Skopje

Vaccination with MRI vaccine according to the recommendations:

During the period from 25.09-22.10.2017 in the territory of the Republic of Macedonia were vaccinated with a total of 10548 people with MRI vaccine, of which 2,747 with a first dose, and 7801 with a second dose among school children. 748 persons which missed  the previous  dose,  were immunized with a first dose, and 230 people with a second dose.

From the total vaccinated with the first dose, 48.2%) are from the territory of the CPH Skopje. 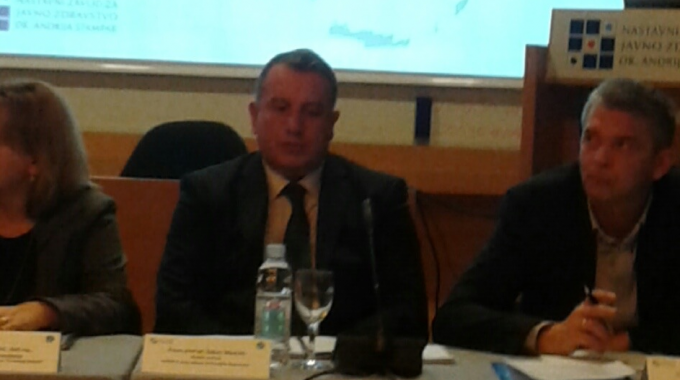